by Stephen Covey, our ActionCLASS Summary

Gandhi once said that the difference between what we are doing and what we’re capable of would solve most of the world’s problems. This is a book about truly learning what you’re capable of and turning it into action. The 8th habit of highly effective people, Covey says, is this: find your voice, and inspire others to do likewise.

For those of you who haven’t read Stephen Covey’s best selling 7 Habits of Highly Effective People. Here they are: 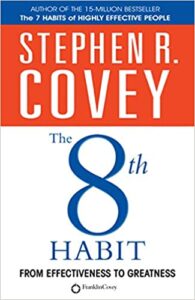 The 8th habit is essentially taking those first 7 habits and putting them into overdrive because you’ll know what you want to do with your life and you’re going to be helping others figure it out as well. It’s the seven habits on steroids if you will. So, according to Covey, here’s the path you need to take.

The first thing we need to do is to understand that when we came flying out into this amazing world of ours, we were given some pretty special gifts. And here’s a couple of them.

One of the most important gifts that we have is the freedom and power to choose. Covey says, that no matter what happens in your life, there’s a place between stimulus and response. It’s summed up by a great quote by Dwight D. Eisenhower, who said this, “the history of free men is never written by chance but by choice, their choice.”

We’ve also been given the gift of what Covey calls the “four intelligences”, mental, physical, emotional, and spiritual intelligence. Likewise, there are four areas of our life that we need to take care of and that we have that choice to take care of. Here’s how we suggest we take care of them.

The main point of all of this is that you were born with some amazing gifts, but it’s how you are going to use them that matters.

It makes sense that if you’re in control of every aspect of your life that you also get to decide what your voice is. Right? Here’s where Covey says you’ll find your voice. When you engage in work that taps your talent and fuels your passion, that rises out of a great need in the world that you feel drawn by conscience to meet, therein lies your voice, your calling, your soul’s code.

It’s such a simple formula but it’s so very profound. You certainly aren’t going to figure it out today or maybe not even this year. But that’s the formula. So struggle with it, debate with yourself, ask others for help, do whatever you need to do to find that magic sweet spot that’s the intersection of your talent, passion, conscience, and a need in the world.

And for those of you who are thinking that you’re too old for this stuff, Colonel Sanders didn’t find his voice until he was sixty-five years old. So, suck it up and get to work.

Let’s assume that in the last two minutes you found your voice. Now let’s talk about expressing your voice. Because if you have your voice, it’s not going to do you much good trapped inside. Here’s how Covey says you need to get it out.

First, you need to continue to be driven by passion. We’re governed by some natural laws in this world and one of those laws is that you’re going to have to put in the time if you want to make a difference. Malcolm Gladwell will tell you that it takes at least 10,000 hours to truly become an expert at something. Have you ever seen anybody invest 10,000 hours in something they aren’t passionate about?

Third, you need to have discipline. Even though you have a vision that you’re passionate about, there are going to be times when life conspires to suck the life out of you. And those are the times that separate those who can from those who can’t. Albert E.N. Grey boils down success to this very simple point. He says that the successful person has formed the habit of doing things that failures don’t like to do. Remember that.

George Washington had the vision of building a new nation united and free from foreign interference. He disciplined himself to learn how to recruit supply and keep people from deserting the revolutionary army. Angered by discrimination against Colonial military officers, British land policies, and restrictions on US expansion, Washington was passionate about the cause of liberty. Vision, discipline and passion.

Now let’s consider Adolf Hitler. Hitler passionately communicated his vision of a 1000 year reign of the Third Reich and a superior Aryan race. He built one of the most disciplined military-industrial machines that the world has ever seen. If you’ve ever seen him speak, you cannot question his passion.

How to help your organisation

We’ve covered how you can find your voice and express it. Now let’s turn to how you can help your organisation, and the people within it unlock their potential as well. If you’re a leader you’ll know that modelling the behaviour you want to see in other people is critical.

You’re on a stage, every single day and people take their cues from you. A leader that inspires others to find their voice, Covey says, act with integrity. So how do you act with integrity? Covey says that this is where the first seven habits come in. Here’s the quick and dirty on those habits.

The first three habits can be summarized simply as a four-word expression. Make and keep promises. The ability to make a promise is being proactive, the content of the promise is beginning with the end in mind and keeping the promise is putting first things first.

The next three habits can be summarised in a short phrase as well. Involve people in the problem and work out the solution together. This requires mutual respect which is win-win, mutual understanding which is seek first to understand then to be understood. And lastly, creative cooperation, which is synergising.

The last habit – sharpening the saw – is increasing your competency in the four areas of your life. Your body, mind, heart, and spirit.

The other big thing you can do to be a role model to those around you is to build trust. You do that in two simple but very powerful ways.

First, you turn trust into a verb. Covey puts it best when he says it like this. “Leadership is communicating to people their worth and potential so clearly, that they come to see it themselves.” People tend to trust you more when you believe in them.

Second, you always search for the third alternative. If you find yourself in a situation where you’re in a disagreement with somebody or butting heads on an issue, ask this simple question. Would you be willing to search for a solution that is better than what either of us has proposed? Do all of these things and you’ll be well on your way to becoming a good role model and helping others find their voice.

So you’ve found your voice, you’re expressing it and you become a role model for your organisation. Good for you. But there’s a reality that you can’t escape if you’re running an organisation.

As Covey says, no margin, no mission. Here are the things you need to do in order to get the entire team working towards the same goals.

Covey calls the first thing Path Finding. I’m going to make it pretty short and quick because I hoping that it’s a self-evident thing for you. You need to include your team in creating your shared vision, your values and your strategy. That’s pretty easy.

Alignment is where the hard stuff begins. Great organisations find ways to get each and every person pulling in the same direction, from the corner office to the front line as they say. The reality is that you can’t be there to guide everybody through each and every decision that they have to make. Here are four disciplines that can help you close the gap between focus and execution.

First, focus on the wildly important. People are naturally wired to be able to do only one thing at a time to a standard of excellence. Therefore, have only a few goals that are critical to your success.

Second, create a compelling scoreboard for these goals so that everybody in your organization always knows the score. A funny thing happens when people know that the score is being kept. They play to win.

Third, translate those lofty goals into specific actions. And four hold each other accountable all the time. Again, what Covey’s done here is boil the formula down to something very simple but very hard to do. Actually implementing these four suggestions will take every ounce of your willpower and discipline. But that’s what it takes.

Finally, let’s talk about empowerment. We’re in a time and place that people are calling the knowledge age and things are different. One of the biggest differences is how we get the most value out of our workforce.

In the industrial age, it was all about efficiency and boiling down a days worth of work into a simple work instruction. However, as the work changes our approach has to change too. Covey argues that with knowledge workers we have to let go of control and become a servant leader. It’s holding people accountable for results but not the actions.

As a servant leader, he says you’d be running along the side your troops and asking the following five questions. How is it going (what’s the score?), What are you learning? What are your goals? How can I help you? And how am I doing as a helper/ leader?

And that my friend is how you find your voice and inspire others to find theirs too.