by Napoleon Hill, our ActionCLASS Summary

Think and Grow Rich – The year was 1937, and the Great Depression was ravaging the world. Things were particularly tough in the United States, where the unemployment rate was as high as 25%, up from an average of 5% before that fateful day in 1929.

So when Napoleon Hill published his book Think and Grow Rich, people ate it up. It gave them hope that they could take control of their financial future by learning and applying his 14 principles.

It sold out its first print run in three weeks, and by the time the Depression was over, it sold more than 1 million copies.

Let’s dive into the 14 principles that Hill tells us we need to learn if we want to be rich. 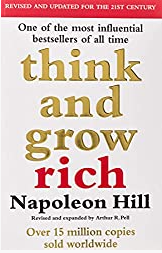 Principle #1. Desire: The Starting Point of All Achievement

How bad do you really want it?

Hill tells us that the foundation of getting what we want in life is the state of mind called “a burning desire to win.”

This is different from wishing. Everybody wishes they had more money, we’re in better shape and had better relationships. But successful people have a burning desire to do it, which is clear from the results they achieve.

Hill’s six-step method for turning your burning desire to succeed into becoming rich looks as follows:

Principle #2. Faith: Visualisation of, and Belief In Attainment of Desire

This principle is about believing – in the very core of your being – that you will achieve the plan you have set in motion.

There must be no doubt lurking in your subconscious mind, or else you’ll find all sorts of reasons to not act on your plan.

You can train your subconscious to support you by feeding it a steady diet of positive thoughts.

In particular, you should concentrate your thoughts on two things.

First, by telling yourself that you have the ability to achieve your plan, and therefore you demand of yourself persistent and continuous action toward its attainment.

Second, because your thoughts will eventually reproduce themselves in outward action, focus your thoughts on the person you intend to become.

Hill was ahead of his time on this one. There have been plenty of studies that have shown that “acting as if” can put you into more positive states of mind, causing your behaviour to change in a way that is congruent with your goals.

Principle #3. Autosuggestion: The Medium for Influencing the Subconscious Mind

This one is an extension of the second principle. Hill suggests that if we use affirmations and visualization, we’ll be more likely to accomplish our goals.

If you want more money, the theory goes, you should visualize yourself having more money.

But there’s a twist that Hill added here that is critical – you should also visualize yourself performing the service that you’ll give in return for those riches, causing the two things to be permanently linked in your mind.

Here’s the rub – your subconscious will learn that if you want more money, you should do more of the things that will get you more money.

The only way to get rich, Hill suggests, is to have some sort of specialized knowledge that the market will value and pay for. General knowledge is of little use in your empire building.

There are three parts to this.

The first part is to identify what knowledge you need. This will change over time depending on the current state of the market. Many years ago somebody who could tell you how to use your fax machine (what’s a fax machine?) to generate leads for your business would be in high demand. Today, not so much.

The second part is to figure out how to acquire that knowledge. This requires you to have dependable sources of knowledge, which you can acquire through:

Finally, the third part is to organise the information and put it into use for a definite purpose, through practical plans.

And to bring this full circle, because the marketplace is constantly changing, so must your knowledge base.

As Hill says in the book:

Principle #5. Imagination: The Workshop of the Mind

Man can create anything which he can imagine. That’s the crux of the fifth principle.

Hill suggests that there are two forms of imagination.

The first is synthetic imagination, which combines old ideas into new combinations.

The second is creative imagination, which is the act of creating something from nothing.

He argues that these truly new ideas and thoughts are unearthed when the conscious mind is stimulated through the emotion of a strong desire – like achieving your biggest goals and dreams, for instance.

He also makes the argument that hard work alone is not enough to bring riches. It requires the combination of ideas, definite purpose and definite plans.

The best way to have a great idea, the saying goes, is to have a lot of ideas.

Principle #6. Organized Planning: The Crystallization of Desire Into Action

While many of today’s “self-help” books will tell you that you can manifest your reality with your mind alone, Hill was a little more practical.

If we are going to achieve our goals, we need a bulletproof plan to get there. He suggests that we create a Master Mind group to help crystallize the plan because surrounding yourself with other people who can help you get to where you want to go is the only way to make sure your plan is truly bulletproof.

Dwight Eisenhower has an often repeated quote that helps make this point:

“Planning is everything, the plan is nothing.

Principle #7. Decision: The Mastery of Procrastination

Procrastination is the opposite of decision. And we must fight it at every turn.

The unsuccessful people had a habit of reaching decisions slowly and changing them quickly and often.

It’s important to keep in mind that what allows successful people to make up their minds quickly is that they have a very clear direction of where they are headed and a plan to get there. That tends to make most decisions very easy to make.

As Hill says, “The world has the habit of making room for the man whose words and actions show that he knows where he is going.

We’ve already determined that there will be many temporary defeats along your path.

Persistence – the combination of desire and willpower – is necessary if we want to reach our goals.

“A few carry on despite all opposition until they attain their goal. These few are the Fords, Carnegies, Rockefellers, and Edisons.”

It’s a cliche to reference Edison’s many failures in creating the light bulb, and his response that “I have not failed. I’ve just found 10,000 ways that won’t work.” But think about it for a second – how many times are you willing to fail in pursuit of your goal? When are you willing to stop?

If your gut instinct isn’t “I will never give up”, you probably need more work on some of the other principles.

Principle #9. Power of the Master Mind: The Driving Force

The Master Mind is one of the core tenets of Hill’s teachings, and it’s a powerful one. He describes it as:

“coordination of knowledge and effort, in a spirit of harmony, between two or more people, for the attainment of a definite purpose.”

Through these groups, Hill suggests that “Men take on the habits and power of thought of those with whom they associate in a spirit of sympathy and harmony.”

One of the original Master Mind groups was formed by Henry Ford, Harvey Firestone, John Burroughs and Luther Burbank.

Things turned out pretty good for those guys, and since then groups of successful people (usually CEOs) get together on a regular basis to help each other solve their biggest challenges.

No matter where you are in your journey, you should consider joining or forming a group of your own.

Principle #10. The Mystery of Sex Transmutation

I’ll just come right out and say it – this one is a little (a lot?) weird.

Here it is in his words so you can judge for yourself:

“Fortunate, indeed, is the person who has discovered how to give sex emotion an outlet through some form of creative effort, for he has, by that discovery, lifted himself to the status of genius.”

What he’s saying is that if you can figure out how to channel your sexual energy into a creative/business pursuit, you’ll be more likely to become successful.

I’m going to leave this one without further comment.

This one is a little less controversial and has occupied volumes of self-help books published since.

The essence of this section is that your subconscious mind is influenced by your emotions, and so you need to take great care that you expose it to positive emotions instead of negative emotions.

According to Hill, there are seven positive emotions: desire, faith, love, sex, enthusiasm, romance, and hope.

Principle #12. The Brain: A Broadcasting and Receiving Station for Thought

This section sees us return to some weird, unproven ideas. However, keep in mind that most of what Hill describes in this book would not have been proven by science at the time of publication, and maybe (just maybe), he is just a little ahead of his time on this one too.

Hill used the metaphor of the radio for the brain (notice that today’s metaphor would be the computer, another thing that doesn’t adequately describe our most important organ), and that it had a “sending station” and a “receiving set.”

Basically, the premise is that we can tap into the minds of collective human intelligence by putting our minds in a state of high vibration through the application of the other principles in this book.

Until this theory is proven (please tell me there are people working on it), we’ll have to make do with the collective intelligence of the world we have access to through the wonders of the Internet.

Principle #13. The Sixth Sense: The Door to the Temple of Wisdom

In this principle, Hill describes what we would today consider intuition. He believed that there is an organ in our body that received knowledge through sources other than our physical senses.

The way Hill suggests we access our intuition is creative if nothing else.

Give it a shot sometime and see how you make out.

Principle #14. How to Outwit the Six Ghosts of Fear: Clearing the Brain for Riches

Finally, Hill tells us that in order to become successful, we need to clear our minds of fear, which causes indecision and doubt to creep into our daily activities.

There are six types of fear he identifies: poverty, criticism, ill health, loss of love, old age, and death.

If we are worrying about these things, we are not focussing on the things we need to in order to become successful.

Because these fears are nothing more than states of mind, and we have control over our minds, we can eliminate those fears by simply deciding to focus our attention elsewhere.